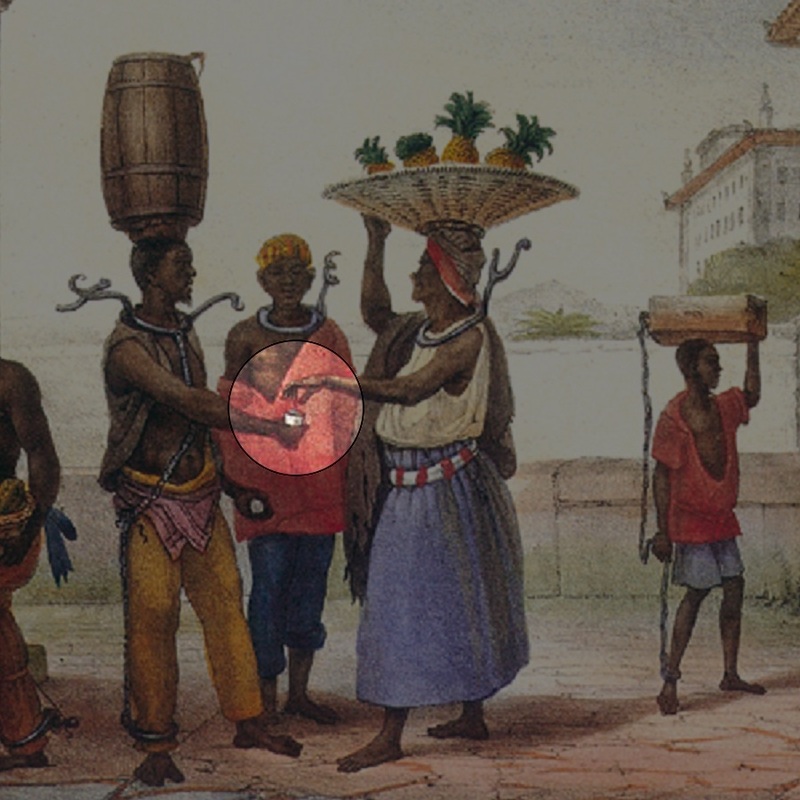 The urban slavery system was organized into a hierarchy of different types of slave labor. At the top was the Ladino, an African born captive who had, through an extremely violent process, adapted to Portuguese culture. The Ladino spoke Portuguese, not his native language; was baptized Catholic and given a foreign Saint's name; dressed in restricive layers of clothing unsuited to the climate; and performed skilled, sometimes highly skilled work. A Ladino might be a ship navigator, or a scribe, or a blacksmith.

The Domestics were mostly women and girls and were kept inside the homes. Unlike the grand plantations of the South in the US, plantation owners in Brazil often kept their families in the cities. The 'Big House' was in Rio, while the house in the interior, at the sugar or cotton or cocoa plantation, would have been more like a country house that was visited by the planter's family. So, domestics were needed in the cities to cook, clean, look after children, and suffer their kidnappers most vile desires.

The Earning Slaves, mostly men and boys, worked in construction, transportation and the movement of goods through the ever-growing city.

At the bottom of the hierarchy, we find the Tigres (the Tigers) and those captured Africans who were never sold: the enslaved with no 'master'.

These low status enslaved Africans had virually no access to any resources necessary for survival.

Due to the high numbers of enslaved Africans arriving daily at the port, the Portuguese and later Brazilan slave-owners had no incentive to make even the smallest of investment in keeping their captives fed, clothed, or basically healthy.

So here we see our Auntie on the right—out selling her pineapples—stopping to share a coin with our cousin on the left. Not only were the urban enslaved instrumental in the communication networks—deliverying messages or helping to find lost relatives--but they were also involved in the distribution of resources for survival.

As a new social order took form under the the most grueling conditions in a strange and violent new world, the Africans found ways to both exploit and subvert the systems of brutality imposed upon them to build community in their new home.