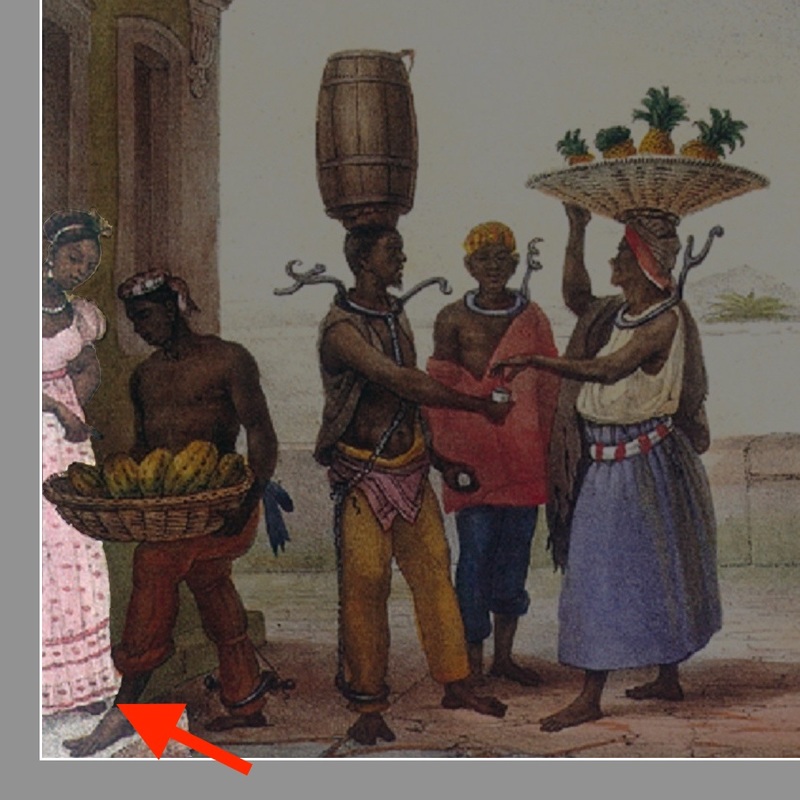 Let's start with this young sister all the way to the left of the painting. Is she an enslaved woman? She's dressed very well and appears to be wearing fine jewels, but as the eye continues down to the bottom, we see a bare foot peeking out from under the dress. The enslaved were forbidden to wear shoes, so this classical Greek pose—with the hip cocked and one foot forward—allows the artist to always show the foot, thereby telling the viewer that indeed, the Black figure in the painting is enslaved.

So why is she dressed like that? Many simply assume that it's the white colonial imagination at work; a case of elevating their own lives by romanticizing the lives of workers, whether free or captive. But in fact, the painter is preserving a fact in this depiction. With urban slavery and ships arriving almost daily, there were many more enslaved people than there was work for them to be forced to do. The wealthy continued to buy more and more enslaved people as a competitive display of their wealth.

Now realize how that dynamic has reproduced itself over the centuries. Look no further than your favorite social media platform to see celebrities showing off their many exotic pets, dressed in designer clothes and sporting jewel encrusted collars!

The dress itself tells a story. This fabric is likely calico, made in India, of cotton. The Portuguese colonial project in Asia was centered in Goa, India. The Portuguese established trade routes from India to Mozambique and then along to Brazil.

Many different types of cotton cloth produced in India were printed in France, not for French domestic markets, but for international trade--specifically the Atlantic Slave Trade. Meanwhile, the English banned the importation of the textiles produced in their colonies in order to protect their own domestic market. So, the European fight to dominate the global textile industry, while simultaneously protecting their own domestic markets ensured that these cloths would end up in colonial territories.