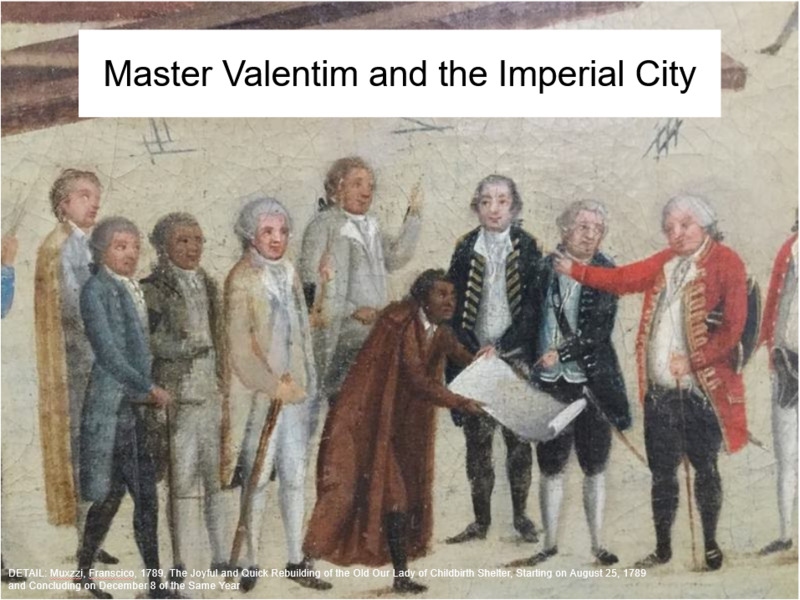 Now let’s talk about who built this capital city. Who were the Africans working in the artisan crafts? Valentim Fonseca e Silva was an architect, urban planner, artist and sculptor who, being favored by the second Viceroy, gave Rio de Janeiro its imperial grandeur. He was born in Minas Gerais in 1745 and died in Rio de Janeiro in 1813. You can learn more about him on my website from the second tour, devoted to mapping his remaining works in the city. This image is a detail from a much larger painting by the Italian, Francisco Muzzi, and is the only known depiction of Valentim. Here he is shown presenting a project to the second Viceroy and it’s interesting to note that among the artisans we can see a range is skin colors and tones, but the Viceroy and his entourage are limited to pinks and whites. Africans, Afro-Brazilians, and people of color (free, enslaved and manumitted) were involved at every level of colonial society.

The dominant mythology of Valentim is that he was born in Minas Gerais of an African woman and a very high ranking, important diamond contractor from Portugal. His father took him back to Portugal when he was 3 years old, raising and educating him there. Valentim returned to Rio de Janeiro as an adult to launch his career. When we deal with myths, legends and tall tales as a type of Liquid Archive, we have to maintain our academic rigor. We have to check, analyze and cross-reference as we would with a colonial document. Turns out, Valentim’s birth certificate and his will have been recently discovered.

Valentim’s birth certificate lists his mother as “slave woman Joana” with no father listed. Furthermore, this supposed father, the elite Portuguese diamond trader had both already left Brazil and died in Portugal before Valentim’s birth! There is no way that man could have been Valentim’s father. There is no evidence that Valentim ever left Brazil. No record of him leaving or returning. So while this myth can be invoked to serve a colonial, white supremacist agenda in that Black greatness must originate with a European intervention, it’s most likely that Valentim himself was the originator of the myth – arriving in Rio with a fictional biography that allowed him to access the elite levels of society. (Fake it till you make it!)

In spite of his excellence and his favor with the Viceroy, he was never able to attain the status of Master and open his own studio, due to what the Portuguese called “the color defect.” Among his many projects, Valentim gave us fountains… lots of fountains.