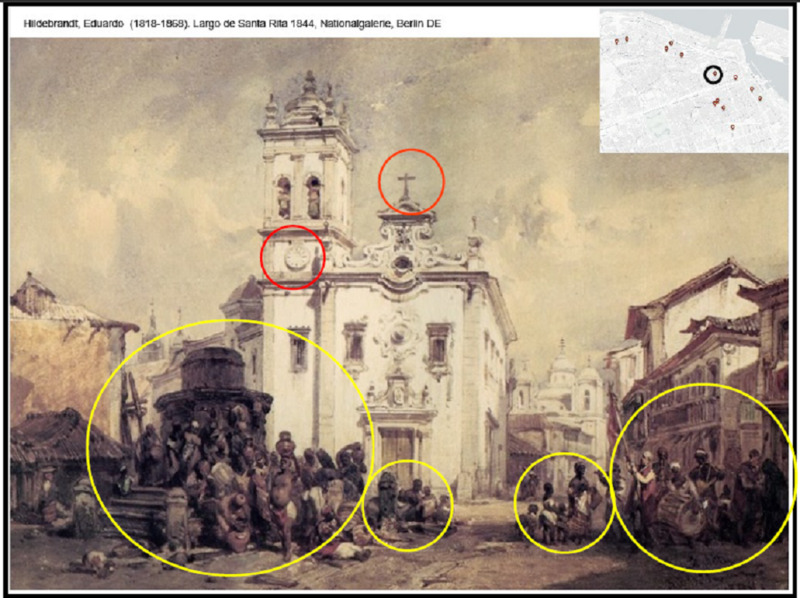 This is a painting from 1844 of a church that was constructed in 1720. This is Saint Rita’s – remember I said we would come back to this church, the Black church that’s not a Black Brotherhood church. So in this church there was a form of segregation, for example, the whites were buried inside the church, as was customary at the time. However, records show that there was a Black cemetery in front of the church that was operational from 1722-1769. We’re not sure, but it seems to have been an open pit; a mass grave that bodies were thrown into. And you can see that by 1844, there is no sign of the cemetery. But we can still see the church and the fountain.

Notice the people at the fountain in the yellow circle on the far left; a group of musicians on the far fight; and this looks like a family in the center-right circle, a mother with some children who appear to be rather well-dressed; and then a group sitting down over here in the center-left circle – not clear what they are doing. And it’s plain to see that there is no presence of any officials of the church or the state. No soldiers. No police. We can understand this as a Black territory in the sense of the work of the Black Radical Geographer, Milton Santos, that these territories can be defined through the presence and the use of these urban spaces by Black people.

The fountain clearly marks the location of the water. But let’s take a different look at the church. The church literally houses flame, through the ritual of lighting candles. The flame is inside the church. The bell tower, the steeple, is a strong vertical pointing to the sky. And we have a cross here, but it’s been disaggregated from the circle, the clock – where time now flows “backwards” in relation to the life cycle flow of our Mbundu cosmogram. We can locate this as an urban space in the colonial sense: church, cemetery fountain, but I would argue that we have a Black urban territory, a social space at the meeting of fire and water.