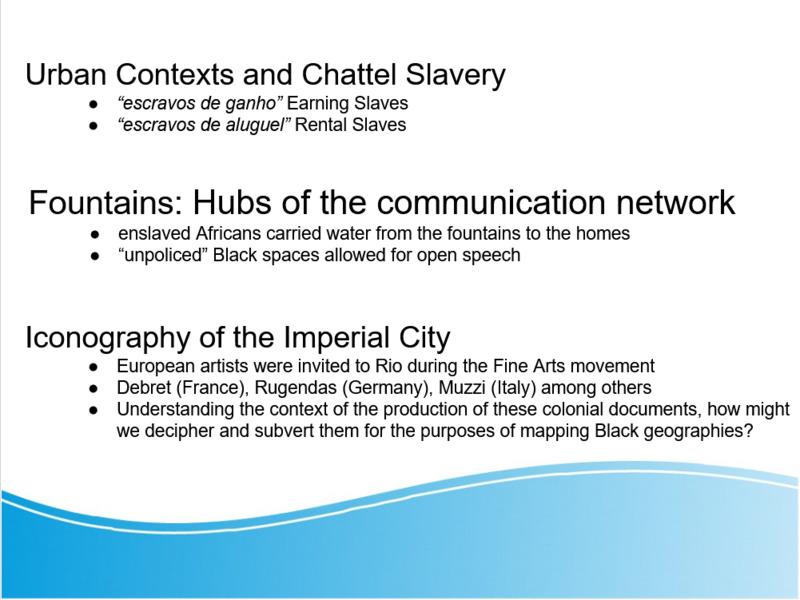 Before we continue into the city, let’s remember a couple of things. Typically, chattel slavery is discussed in the context of agriculture: cotton, sugar, tobacco, indigo. But today, we’re talking about slavery in an urban context. By 1808, when the Crown arrived, half of Rio’s population was enslaved, constituting the largest urban enslaved population since the Roman Empire. Many of these Africans were what were called “earning” slaves or “rental” slaves: meaning that they had to get jobs, but of course, their wages were paid to their captors; or their captors could extract their labor and then “rent” them out to others whenever they needed to raise some cash.

One of the jobs that was done by enslaved Africans was the collection of fresh water for the homes. This was the work of primarily (but not exclusively) women who were kept as domestics. This allowed the space of the public fountains to become communication hubs, places where Blacks could meet and speak freely, whether planning rebellions or escapes, asking after loved ones or sending a message to the runaway communities, not to mention falling in love, stealing a kiss, or just catching up on the gossip – everyday life.

The Fine Arts Movement was a colonial project where European artists were invited to Rio to create images of the capital city for consumption by a European audience – to place Rio on the same level as a European capital. Thus, they are highly romanticized depictions that reflect not of the city and its inhabitants, but of the colonizers themselves and of how they saw their lives in relation to European standards of the time. Nonetheless, these can help us locate the fountains and the activity around the fountains.